Game writing starts at the beginning of a game’s concept: Who are the player and characters, where are they, what is happening and why are they motivated to do something about it?

Explore the writing category to learn more about writing.

How to get started at game writing

Start by writing some non-linear game stories in a visual novel toolkit like Fungus or a writing tool like Articy Draft. 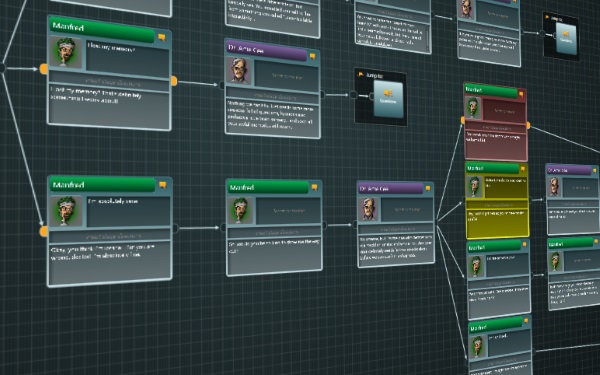 Players don’t want to read or listen to more dialogue than they have to. The general rule of brevity and concision applies:

Often times text in games is meant to appear like documents written by characters within the game world. When you write non-dialogue text, the rules of good essay writing in general apply.

Paul Graham wrote a great 4 sentence essay called Writing, briefly that explains how to winnow writing down to its essentials:

I think it’s far more important to write well than most people realize. Writing doesn’t just communicate ideas; it generates them. If you’re bad at writing and don’t like to do it, you’ll miss out on most of the ideas writing would have generated.

As for how to write well, here’s the short version: Write a bad version 1 as fast as you can; rewrite it over and over; cut outeverything unnecessary; write in a conversational tone; develop a nose for bad writing, so you can see and fix it in yours; imitate writers you like; if you can’t get started, tell someone what you plan to write about, then write down what you said; expect 80% of the ideas in an essay to happen after you start writing it, and 50% of those you start with to be wrong; be confident enough to cut; have friends you trust read your stuff and tell you which bits are confusing or drag; don’t (always) make detailed outlines; mull ideas over for a few days before writing; carry a small notebook or scrap paper with you; start writing when you think of the first sentence; if a deadline forces you to start before that, just say the most important sentence first; write about stuff you like; don’t try to sound impressive; don’t hesitate to change the topic on the fly; use footnotes to contain digressions; use anaphora to knit sentences together; read your essays out loud to see (a) where you stumble over awkward phrases and (b) which bits are boring (the paragraphs you dread reading); try to tell the reader something new and useful; work in fairly big quanta of time; when you restart, begin by rereading what you have so far; when you finish, leave yourself something easy to start with; accumulate notes for topics you plan to cover at the bottom of the file; don’t feel obliged to cover any of them; write for a reader who won’t read the essay as carefully as you do, just as pop songs are designed to sound ok on crappy car radios; if you say anything mistaken, fix it immediately; ask friends which sentence you’ll regret most; go back and tone down harsh remarks; publish stuff online, because an audience makes you write more, and thus generate more ideas; print out drafts instead of just looking at them on the screen; use simple, germanic words; learn to distinguish surprises from digressions; learn to recognize the approach of an ending, and when one appears, grab it.

And please indent your writing in smaller chunks than that show-off semicolon filled super sentence.

You can leave things about your story ambiguous and up to the player to ponder, but you don’t want to the player to not notice the ambiguities at all. Make sure the important parts of the story are manifested as more than a snippet of text that they may have missed or skipped. Ideally, embody important things in the world itself and reference those things in the text.

Unless you’re writing the darkest of horror stories, humor is a welcome relief between all the seriousness in games. It is worth making it a goal to have something funny in every text and dialogue so that players come to expect it and look forward to reading every

Make the things said in dialogue and text useful to the player! If they can skip all the text, they will.

Keep your story flexible as your gameplay changes

Telling your story shouldn’t get in the way of designing your game. Let the story stay flexible as the game develops so you don’t lock yourself into a story that limits finding the fun.

Figure out who your characters are and convey their personality through the way they say things. Let characters be vibrant and let backstory shine through how you characterize them in relation to the world.

Words relate to each other

Juxtaposition of contrasting words force people to pause and process what the juxtaposed words say.

Read your lines aloud with a friend

Professional developers who don’t play act their lines write bad lines that sound dumb when spoken out loud. Ask yourself what the characters would really say in the situations they’re saying them and if the lines sound wrong change them.

You can convey things about the game’s world without making them read text explaining it. Even dialogue-heavy games have far less exposition than most shows and movies.

Games don’t need to use expository words or dialogue to convey ideas, and they can convey strong narrative by putting the player into control of game mechanics that provoke thought and suggest things by themselves.

Games like missile command convey life saving in the face of nuclear war without any words of exposition. It does so by forcing the player to receive nuclear strikes and defend cities without the use of words.

Why most games tell bad stories

Videogame storytelling isn’t just about the narrative. Narrative doesn’t exist independent of the other elements in the game.

Writing isn’t the high concept story behind the game.

It’s every part of the game that contributes to the narrative. Art tells part of the story.

Many other aspects of the game constrain the writer who is often brought in late in the game development process.

Many game writers are from outside the game industry and don’t know how to write for the medium.

In most TV and movie formats, writers expect to entertain audiences with non-stop dialogue, whereas most games give the player freedom of movement for the majority of the game with intermittent brief dialogue.

The mechanics of the game should teach us about the characters and reveal the plot line within the gamplay itself.

The development team must understand the narrative goal and incorporate it into every aspect of the game’s design so that narrative shines through the entire game, not just the word parts.